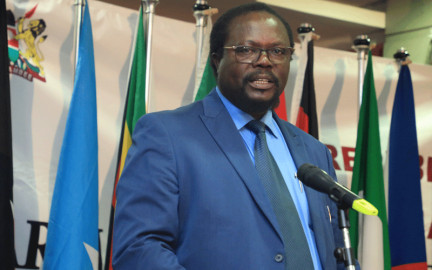 Kanduyi MP Wafula Wamunyinyi during a past briefing. PHOTO / COURTESY

A faction of Ford Kenya members led by Kanduyi MP Wafula Wamunyinyi and his Tongaren counterpart Eseli Simiyu has decamped from the Moses Wetangula-led party after protracted party wrangles.

This follows the publishing of newly ratified Ford Kenya officials by Anne Nderitu, the Registrar of Political Parties, in a gazette notice on November 25, 2021 after a National Delegates Congress (NDC) held by Wetangula and his allies.

According to Wamunyinyi, who was speaking during a press conference on Thursday, the breakaway group will join a new vehicle and make an announcement on their move on December 14, 2021.

“We are not going to continue to be held at ransom. The 2022 elections are just around the corner. IEBC has released a time table and we only have one or two months and you can see parties preparing themselves,” Wamunyinyi said.

Wamunyinyi proceeded to urge other Ford Kenya members to follow suit and leave for new pastures, hinting at a possible link up with ODM leader Raila Odinga.

“We urge our loyal members to join us. As you are all aware, we support the handshake and Azimio la Umoja,” said Wamunyinyi.

The Kanduyi MP cited Wetangula’s alleged continuous meddling of the party affairs as one of the reasons that informed their decision.

“It appears that Wetangula is so determined through all means to retain leadership.  Our continuing fight over this is not going to be helpful to us, that is why we have decided to leave,” he said.