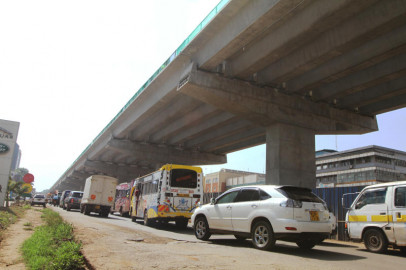 The Kenya National Highways Authority (KeNHA) has issued a traffic notice to road users regarding the ongoing construction of the Nairobi Expressway.

In a statement on Tuesday, KeNHA underscored current weather conditions in the country which have led to heavy downpours specifically at the capital causing huge traffic snarl-ups at certain points of the road.

“Even as the civil works are ongoing, traffic management from Mlolongo to Westlands remains a critical component of project implementation," read the KeNHA statement.

"Due to the ongoing rains, various sections of the road have experienced flooding and civil and drainage works have been prioritized in the affected sections."

In order to ensure there is the relative ease of movement and safety for all road users, the authority announced that some sections of the road which had been closed are now open.

Even as the authority commits to easing traffic flow in and out of the CBD, motorists are cautioned that some sections will still experience traffic congestions.

They include; U-Turn from Allpack service road (access to service lane is blocked and motorists may make U-turn at Mlolongo), Gateway Mall (excavation ongoing), GM area (use temporary diversion), Capital Centre (rehabilitation of A8 road) and Bunyala Roundabout in University way.

The authority further laid out a schedule indicating opening dates to some of the major closed road sections.

"Haile Selassie-University Way roundabout and Gateway Mall will be opened to the public on December 15, 2021," stated KeNHA.

With KeNHA noting the current progress of the Express to be at 76.4%, it remains confident that by June 2022, it will be open to the public just as promised.

Motorists are implored to continue exercising caution and road courtesy as that will help manage traffic better.