Karen Nyamu says she flew with Samidoh, but that they were connecting to different destinations 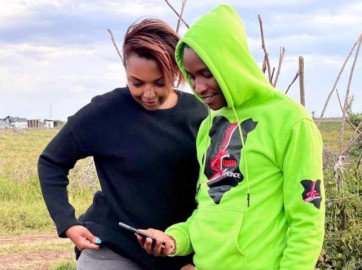 Politician Karen Nyamu has clarified that she indeed travelled with her baby daddy, musician Samidoh, on the same flight, but that they were actually headed to different destinations.

Nyamu took to Instagram on Thursday to respond following online drama after it emerged that Samidoh’s wife had dropped him at the airport, only for him to jump on a flight with her.

However, according to the 2017 Nairobi Woman Rep aspirant, they crossed paths but both had business in different places.

“The truth will set you free. One thing I will never do is be afraid of you guys. Why should I? It was easier to say we took different connection flights because we both had business in different final destination,” she wrote on her Instagram stories.

“I’m embarrassed to do this but I know if I don’t, the narrative will remain that I’m crazy and forcing things. I have never said anywhere that I am landing in Dallas and if I land in Dallas, what will be the big deal?”

She accused the Kikuyu singer of igniting the trolls instead of coming to her defence, adding that she sometimes wishes she wore the pants in the relationship.

“I am tired of standing up for myself against these trolls and the person who should stand up for me is the one fueling it. Sometimes I wish I was the man,” she wrote.

“I don’t want anyone misrepresenting me. I love people. I’m just a people’s person and I will soon have an opportunity to do what I love. Serving people!”

The politician added that she fell in love with the married singer and will never regret it, further stating that regardless of their unending drama, “a little girl” inside of her still gushes over him.