Five killed in a road accident on Londiani-Muhoroni road 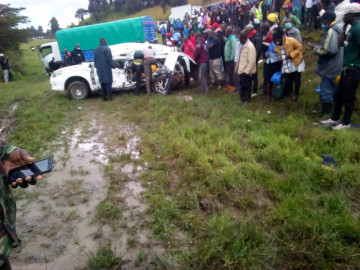 Five people were killed in a grisly accident on the Londiani-Muhoroni road in an accident involving a Toyota Fielder and a lorry at the Jambo Kenya junction.

The private car which was reportedly ferrying five people to a funeral in Kisumu reportedly lost control and landed onto the opposite side of the road where it was struck by an oncoming lorry.

The five occupants of the saloon car died on the spot, reports say, while the driver of the lorry sustained injuries and was rushed to Kipkelion Sub county hospital for treatment.

The bodies of the deceased were removed to the Kericho County Referral Hospital Mortuary.