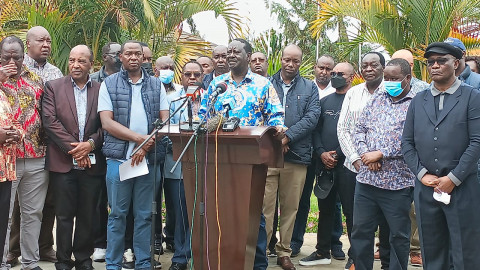 Over 30 governors from across the country have endorsed ODM leader Raila Odinga's  August polls presidential candidature.

The county bosses aligned to the Azimio la Umoja camp declared their support for Odinga after meeting with him in Naivasha on Monday.

Hailing him as the ‘father of devolution’, the governors said their support for Raila was motivated by his support for a decentralized system of governance.

The governors vowed to mobilize the grassroot teams to facilitate voter registration in an effort to boost Raila's chances of becoming the fifth president.

“We are happy as governors that we have found a person who can defend and protect devolution,” stated Kitui Governor Charity Ngilu.

“We all as governors have come here to say, with one voice, that we are going to go out there to make sure that Raila Odinga is the next president of Kenya.”

The leaders said they believe Odinga will ensure equitable distribution of resources in the country adding that they will spare no energy to support his bid.

The county bosses further criticized Deputy President William Ruto’s camp, accusing them of being anti-devolution and not supporting transformation of the country.

“There is only one person who over the years never supported the constitution, not in 2005, 2010, and even now when we wanted to amend it,” said Ngilu, making her case against a DP Ruto presidency.

“Somebody must forever be wanting to do things that are not right for this country.”

Monday’s meeting, the governors said, was to deliberate on peace-building during the electioneering period.