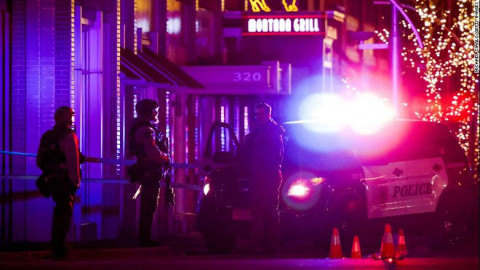 Police stand outside the Belmar shopping center on December 27, 2021 in Lakewood, Colorado.

A string of shootings across the Denver metro area left multiple people dead and a police officer injured, authorities said.

Police confirm there are at least four dead. The suspect is also dead, authorities said.

"There are four significant locations where gunfire took place in the City and County of Denver," Denver Police Chief Paul Pazen said at a news conference late Monday.

The first shooting began just after 5 p.m., when three people were shot, leaving two adult women dead and one adult male injured, according to Pazen.

One adult male was killed at a second location, and at a third location, a gun was fired, but no injuries were reported.

Denver Police officers identified a vehicle associated with the incident and a pursuit ensued. There was an exchange of gunfire between the suspect and officers, Pazen continued. No officers were injured as a result.

"We believe the individual, after disabling the police car, fled into Lakewood," Pazen said.

Police in Lakewood received a call of shots fired at a business just before 6 p.m., according to Lakewood Police spokesman John Romero.

One person was pronounced dead at the scene, Romero said during the news conference.

Police were able to get a description of the vehicle and the suspect. Lakewood Police found the car, and as they attempted to make contact with the driver, the driver opened fire on police, who returned fire, Romero said.

The suspect fled on foot to a nearby shopping area.

Police officers work at a scene where two women were killed and a man was injured in a shooting on December 27, 2021 in Denver, Colorado.

Police officers work at a scene where two women were killed and a man was injured in a shooting on December 27, 2021 in Denver, Colorado.

The suspect "allegedly felony menaced another business with a firearm before retreating to the Hyatt Place" according to Romero.

At the hotel, the suspect allegedly shot a clerk and "that person was taken to the hospital -- we do not know the extent of the injuries there or exactly how that person is doing," Romero continued.

The suspect then fled the area, and when confronted by a Lakewood Police officer, shot and struck the officer, who is undergoing surgery.

There is no threat to the community, authorities said.

A motive for the shootings is unknown, and an investigation is ongoing.