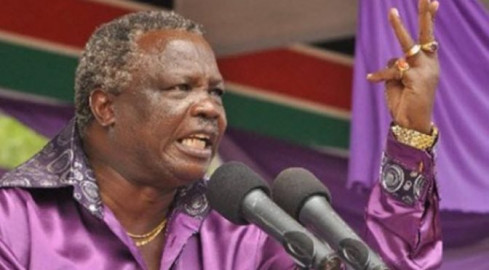 Francis Atwoli, Secretary General of the Central Organization of Trade Unions (COTU), has applied to the Kenya Industrial Property Institute (KIPI) for exclusive rights for the  use the viral exclamation: Alaa!

What this means is that should he get the green light, then you will be required to seek permission or pay him before you Alaa! on anything, online or offline. Or anywhere.

Atwoli contends in his application that the phrase has no English translation, claiming that the slogan, or chant, is a unique exclamation attributed to him publicly.

The phase caught on sometime in February when the Trade Unions boss was appearing for an interview with Citizen TV’s JKlive.

The term became the default response for anything shocking or absurd in Kenya, both online and offline, hours later and for weeks after that.

It was used and  re-used, and then some.

Currently, some enterprising Kenyans are using it on branded, made-to-order tee-shirts.

Kenyans wishing to challenge Atwoli’s latest move have until December 29 to do so. They will also be required to part with Ksh. 5,000 if they are Kenyan citizens or Ksh2,500 if they are foreigners.

A trademark, according to KIPI, is a symbol used to identify the items of an industrial or commercial firm, or a collection of such enterprises.

"The sign may consist of one or more distinctive works, letters, numbers, drawings or pictures, monograms, signatures, colours or a combination of colours," reads KIPI's website.