'You can insult President Kenyatta and nothing will happen,' Raila says as he recounts Nyayo House horrors 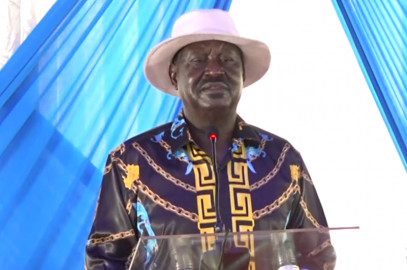 Orange Democratic Movement (ODM) party leader Raila Odinga has now urged Kenyans to vote in the right leaders during the upcoming August elections, lest they risk taking the country back to a time when even basic freedom of speech was stifled.

According to Odinga, Kenyans must learn from history and take the future of the country into their own hands to avoid making the same mistakes that were made in the past.

The former premier spoke on Friday in Homa Bay County while attending the burial of Dr. Odhiambo Olel, where he recounted the horrors that political detainees underwent at the infamous Nyayo House torture chambers during the late retired president Daniel arap Moi’s regime.

He narrated that Dr. Olel was among such detainees who were allegedly tortured at Nyayo House, alongside others whose only crimes were voicing contrary opinions to those of the then Head of State.

Odinga hence cited the struggle that was mounted by such detainees, eventually leading to the freedom of speech and expression that Kenyans enjoy now, including but not limited to even insulting the current president and getting away with it.

“Many people don’t understand Nyayo House…when we talk about Nyayo House, they think it’s the one you see up there…the Nyayo House down there in the basement, there are cells, torture chambers. When you go inside there, rooms are painted differently. There are rooms which are painted completely black on the walls…another room all the walls are red, and another all are white,” he said.

“When they put you in the cells, they open a water tap and fill the floor with water, so that you’ll be sitting in water…that’s when you’ll know how long the night is. In the morning they will take you again, handcuff you, tie your eyes, take you into a lift upto the 23rd floor where you will find yourself at the top of the basement of Nyayo House. Then they tell you to confess, otherwise they throw you down to the ground”

He added: “People like Olel who survived (the torture chambers) ended up being convicted and taken to Kamiti, but for no crime at all committed. These days somebody can come up and stand and shout and insult President Uhuru Kenyatta and nothing will happen to him. Because of the democratic space that was opened through this struggle by the people.”

The ODM chief further clapped back at rival political factions that have since criticized his constant dwelling on history during his political rallies and speeches.

Odinga also urged the youth to register as voters ahead of the forthcoming polls, telling them that the country was heading into a third revolution whose outcome lay squarely on their palms.

“Sometimes the younger generation doesn’t understand where we’re coming from, most of them don’t even want you to talk about the history. But if you do not talk about history, then you’re a lost nation, because you’re likely to repeat the same mistakes of the past…unless you can learn from history. That’s why it’s important to remind our newer generation where we’re coming from as a people,” he stated.

“We’re in the process of the beginning of the third revolution; the first brought political independence, the second gave us the Constitution, the third and the last is economic revolution, to transform this country from a struggling third world economy to a middle-income economy. And this is a youth revolution, that is why we’re saying that we want the youth to rise up and be counted.”