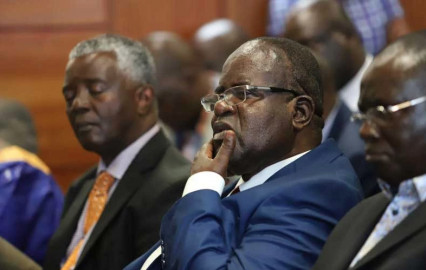 File image of Homa Bay Governor Cyprian Awiti and his deputy Hamilton Orata during a past function. PHOTO | COURTESY

The Union of Kenya Civil Servants, Homa Bay County branch, have threatened to down their tools should the county government fail to pay their December salary by Friday this week.

The union demands full payment of December salary and part of November salary which they claim some union members did not receive.

Addressing the press in Homa Bay Town, the union secretary Tom Oketch accused the county government of disobeying the agreement which they had signed that the salary should be paid every 8th of every month.

Aketch says that the union members are facing economic challenges and cannot meet their basic needs due to delayed payment of their salary.

Aketch, who was flanked by other union leaders, said the union will issue a strike notice to the county government and by the end of this week they will down their tools until the salary is fully paid.

He appealed to the county government to obey the agreement which they had signed to enable workers receive their salary.