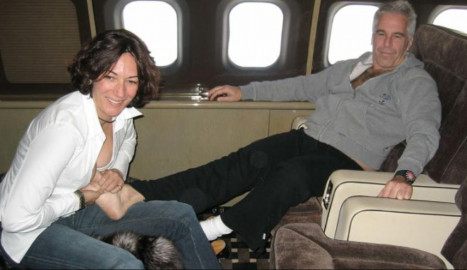 Ghislaine Maxwell's defense team has rested its case in her sex trafficking conspiracy trial without Maxwell taking the stand to testify.

The defense rested after presenting its case over two days in which nine witnesses were called to testify in defense of Maxwell, a close confidante and longtime associate of Jeffrey Epstein. Prosecutors said they would not put on any rebuttal.

Maxwell confirmed she would not testify in her defense Friday. Asked by Judge Alison Nathan if she understood her rights, Maxwell pulled down her mask and responded, "Your honor, the government has not proven its case beyond a reasonable doubt and so there is no need for me to testify." The jury was not present.

Closing arguments are expected Monday, and Judge Nathan said she expects to instruct and charge the jury the same day, giving jurors two days to deliberate before court closes next Thursday and Friday for the Christmas holidays.

The jury can return to continue deliberating the following week if they have not reached a verdict.

Maxwell has pleaded not guilty to six federal charges, including sex trafficking of minors, enticing a minor to travel to engage in illegal sex acts, transporting a minor with the intent to engage in criminal sexual activity and three counts of conspiracy.

The case against Maxwell, 59, relies mainly on the testimony of four women who say they were sexually abused by Epstein when they were under the age of 18 -- and that Maxwell facilitated and sometimes participated in the abuse. Prosecutors rested their case last Friday after 10 days of testimony and calling 24 witnesses.

Maxwell's defense attorneys have argued she is being scapegoated for Epstein's actions and have attacked both the motivations and memories of the women who say they were abused.

Epstein was indicted on federal sex trafficking charges in July 2019 but died by suicide in prison a month later. He'd previously pleaded guilty in 2008 to state prostitution charges.

The defense on Friday called to the stand Eva Andersson-Dubin, who testified she dated Epstein on and off from 1983 through about 1991. She confirmed that she and her now-husband, hedge fund billionaire Glenn Dubin, remained friends with Epstein through the 2000s.

Asked Friday if she'd ever been involved in such a scenario with Jane, Dubin responded, "Absolutely not."

A prosecutor clarified on cross-examination that Eva Andersson-Dubin is not necessarily the only Eva to have ever interacted with Epstein, suggesting "Jane" could have been referring to someone else.

On Thursday, as part of the defense's effort to undermine the accusers' testimony, a psychologist and professor at the University of California Irvine testified about false memories, telling the court people can be exposed to misinformation about an event after the fact and incorporate it into their memory, making it inaccurate.

"Even traumatic experiences can be subjected to post-event suggestion that can exaggerate, distort or change the memory," Dr. Elizabeth Loftus said.

Court began Friday with a back-and-forth between the judge and the defense, who, prior to the jury being called in, indicated it had at least two potential witnesses that could have carried their case into Monday, including one the defense said had ignored a subpoena.

Judge Nathan was visibly frustrated by the news and asked the defense why she had not heard of the issue earlier, saying, "a non-responsive witness is not a little thing."

The other potential witness was an 81-year-old man who lives in the UK and owns a pub across the street from Maxwell's London townhome. Per the defense, his testimony would have helped prove the allegations by one of the accusers, "Kate," could not have taken place when she says they did.

Nathan also expressed concern about the pandemic and indicated she was inclined to compel the defense to rest its case Friday, according to her policy that parties have a witness ready to testify or rest their case.

Defense attorneys argued with the judge and prosecutors, with defense attorney Laura Menninger stating, "Our client's life is on the line."

Prosecutors felt the defense had ample time to sort out logistical issues.

"We strongly disagree with the suggestion that defense counsel has been unduly rushed here," prosecutor Maurene Comey said.

Defense attorney Bobbi Sternheim previously expressed concerns about the timing of closing arguments and potentially charging the jury to deliberate with limited time before the holiday break.

"Christmas this year is particularly celebratory," she'd said, "since people were not able to do that last year. Our concern is that the jury might feel we don't want to come back and would rush to judgment."

Ultimately, on Friday, the defense opted to withdraw its request for an arrest warrant for the witness who did not respond to the subpoena. The parties also agreed to a stipulation about Maxwell's property ownership in London in the 1990s, so the defense opted not to continue the push for testimony from the pub owner.