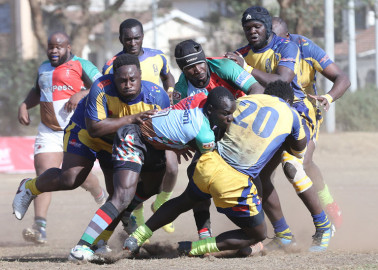 Homeboyz RFC head coach Simon Odongo says their target is to get maximum points when they face off with Kenya Harlequins in their third Kenya Cup match this weekend.

Homeboyz lost to Masinde Muliro University over the weekend at the MMUST Grounds and Odongo wants a quick response from his charges.

“I think we didn’t take our chances because we lost two penalties and that's how chances went. We also lost two conversions and with that we could have easily won the match,” said Odongo.

“But at least that gives us something to go back and work on, it means we're not yet ready (to win the championship), so I think the boys will go and work harder so that we can come out stronger,” he added.

According to the tactician, working on their combination and formation will be key if they are to defeat Kenya Harlequins.

“We have a new number ten, centre and debutant so we’ll try new different formations and partnership in the midfield and playmaking department considering we haven’t been playing for the past season,” concluded Odongo.

Quins on the other hand enjoyed a good weekend defeating Nondescripts 24- 6.