Comoros lose both goalkeepers as Covid sweeps through squad 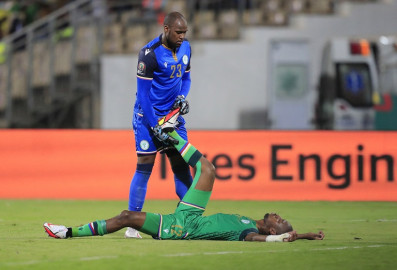 The Comoros, the surprise package of the Africa Cup of Nations, are struggling to put a team together for their last-16 tie against host nation Cameroon after 12 players and management tested postive for COVID-19, their federation announced Saturday (Jan 22).

The 12 positive tests include both of the Coelacanths' fit goalkeepers, with the third goalkeeper, Salim Ben Boina already injured. Comoros are due to face Cameroon on Monday.

"The Coelacanths affected by Covid...include coach Amir Abdou, our only two goalkeepers, Moyadh Ousseini and Ali Ahamada," the federation tweeted two days before an historic match for the Comoros who qualified for the last 16 in their first appearance at the tournament.

With no goalkeepers currently available for the tie, the Comoros are in serious trouble.

Confederation of African Football rules for the tournament dictate that teams must play games as long as at least 11 players test negative for the coronavirus.

If no goalkeeper is available, an outfield player has to stand in.

"We are trying to do everything in our power to find alternative solutions" but "without the coach, without major players and especially without our only two goalkeepers who remained, the situation is quite complicated", admitted Hamidi.

The Comoros, representing a tiny island nation off the south-east coast of Africa, snatched their qualification to everyone's surprise by beating Ghana 3-2 and advancing as one of the best third-placed sides.