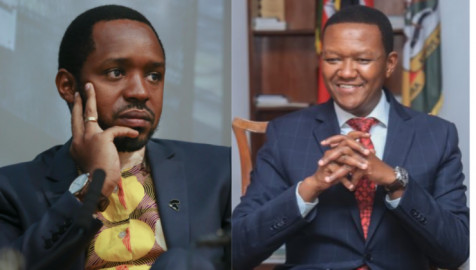 Activist Boniface Mwangi has been barred from publishing any defamatory material against Machakos Governor Alfred Mutua pending hearing of a case pitting the two.

Mwangi has also been restrained from associating the governor with an alleged bomb attack at his Lukenya house on October 21, 2021.

The outspoken activist was further barred from referring to the Machakos County boss as “a rapist, a thief, a corrupt individual, a molester, a murderer, a philanderer, a charlatan” as in a previous video on his social media pages.

The case was set for mentioning before Judge George Odunga on November 4, 2021.

Governor Mutua on October 21 demanded an apology from Mwangi for linking him to a raid that took place at his Lukenya house that same day.

The governor wants Mwangi to pull down all social media posts alluding to that effect, including the above mentioned video.

"That you retract and pull down ALL of the said libelous and defamatory publications, of and concerning our client in the same prominence as in the offensive publications; That you publish an apology which is acceptable to us in flee manner approved by our client;" read a demand letter through lawyer Harrison Kinyanjui.

The Machakos Governor termed Mwangi's claims as false and defamatory, adding that he had "injured his character as a leader of good standing of repute.”

He said the implications of Mwangi’s posts “touch on his leadership abilities and qualities germane of a person seeking to be elected in Kenya as the President in the forthcoming 2022 General elections,” and “his business involvement and trans-world networks in business, singly and in partnership with others.”