Sifuna, Malala in fierce war of words over ANC-UDA pact 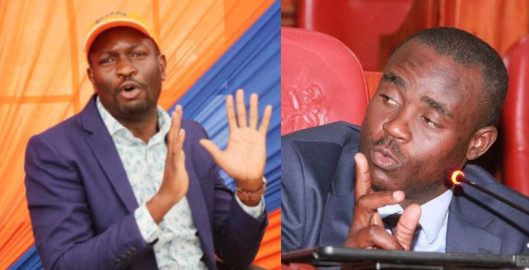 While debating the possible effects of Sunday's 'earthquake' announcement on the political arena on Citizen TV's Daybreak show on Tuesday, the two engaged in a lengthy word battle.

ODM's Sifuna stoked the fire after claiming that ANC's betrayal of OKA was imminent and that it had proved the expectations of many in the rival ODM.party.

"After the event on Sunday I was one of the happiest people in this country. I was so happy I didn't know what to say because it was a vindication from the happenings to the things we have been telling you about," stated Sifuna.

"If you are a keen political observer these are things, you should have known it was not a surprise...the question of the day is that really how sneaky are you as a friend to try and pull a move like that on your colleagues then Malala is lying to us that it was in the print media," her added.

Senator Malala in his response, said that Sifuna is 'a worried man' masking his worry with a 'brave face'.

He further chastised Sifuna for demeaning the ANC party, attacking ODM for having no representatives in Bungoma county, Sifuna's home turf.

"I am very confident because I can see the effects of the earthquake on Edwin Sifuna. He wants to put on a brave face but deep down he is a worried man, he has a lot of panic because he doesn't know what to do next," Malala posed.

"I want to tell you Edwin Sifuna you cannot continue to demean ANC, if you so think that ANC is a small party why are you agitated?...It is evident that you have fallen into a panic. You are saying that ANC and Ford-Kenya are very small in consequential parties yet where you come from in Bungoma ODM has no single MCA," he added.

SG Sifuna then cut short denying Malala's claims: "That's a lie, we have nine MCAs in Bungoma, you do not have the facts Malala...and so does ANC, it does not have any member in Bungoma," responded Sifuna.

"Even in jubilee there are more members of parliament in Kakamega than ODM, therefore you cannot start demeaning parties that pushed and flushed you out of Western region. I know the bitterness you hold against our parties," he said.

"Sifuna you have no space in Western region, the association between William Ruto and Musalia Mudavadi is going to ensure that we wipe this menace called ODM out of Western once and for all."

Sifuna further, poked holes in  the partnership between the two parties, warning UDA about the pact, saying they will live in pain because it will not add any value to their party.

"In politics there are people who can add value for you and there are other who do not, they come to take away from you...I want to send the same warning that I gave to Gideon Moi to William Ruto that you will know nothing but pain as UDA when you walk with these brothers of ours. We know them and we know what we are telling you," Sifuna said.

Malala then lashed back at Sifuna calling him a social media platform manager for ODM and a spanner boy with no mandate.

"The Secretary General for ODM is not Ediwn Sifuna...Sifuna is just there for purposes of optics. His job description is basically to handle the social media platforms for ODM and taking selfies at Orange House," he said.

"Sifuna is simply a spanner boy who has got no definite job description and has no mandate to makes decisions in ODM, he has no monopoly to demean other political parties."