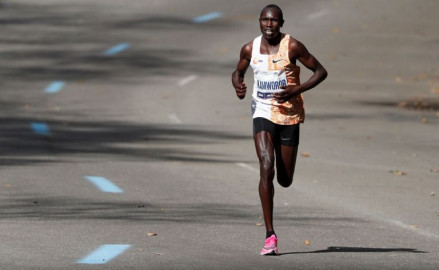 Three-time World Half Marathon champion Geoffrey Kamworor is set to make his debut at this year’s Boston Marathon set for April 18.

This year’s race comprises a star-studded line up that also includes defending champion Benson Kipruto as well as the 2017 and 2019 winners Geoffrey Kirui and Lawrence Cherono respectively.

Kamworor will be hoping to continue his fine form at the US soil having claimed two titles at the New York City Marathon.

The 29-year-old notched a new personal best of 2:05:23 when he finished fourth at the 2021 Valencia Marathon held last month.

Ekiru will also have a point to prove having run the fastest time in the world last year (2:02:57) when he won the Milano Marathon. He however dropped at the London Marathon before claiming victory at the Abu Dhabi Marathon in November.

“I am happy to announce that I’ll be lining up in the streets of Boston for my first time next April in the Boston Marathon. I can’t wait for it,” Ekiru said via his official Facebook page.

“Being back in Boston as a champion is very exciting, but at the same time I feel the pressure and the responsibility to defend my title. I really admire those athletes that managed to be multiple champions in big races. I really want to do my best to be one of them and I really hope to make my name among those Boston champions that people will remember for a long time.”

Bernard Koech, Eric Kiptanui and Bethwell Yegon are the other Kenyans who will be taking part in the world's oldest marathon.

The Kenyans will however face a stiff challenge from the Ethiopian contingent led by three-time Olympic champion Kenenisa Bekele and world marathon champion Lelisa Desisa.

Bekele will be making his debut in Boston while Desisa will be on the hunt for his third title after securing victories in 2013 and 2015.