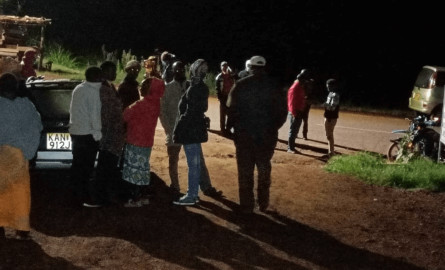 Family members mill outside the Nuclear Hospital in Gichugu where the assistant chief had been rushed after reportedly being stabbed by his wife over an undisclosed feud.

Shock and grief engulfed Kiamugumo village in Ngariama ward in Gichugu,Kirinyaga County  after a woman reportedly killed her husband who also doubles up as the area assistant chief.

Jedidah Wanja, 35, used a kitchen knife to kill her husband Dennis Magu over an undisclosed family feud, according to Gichugu sub-county DCI boss Millicent Ochuka, who confirmed the incident.

“The suspect said the incident happened after her husband  asked for airtime but I cannot believe she can kill him over airtime ' Ochuka told the media.

Residents could not contain their shock following the Wednesday, December 15, 10pm incident.

The deceased is the son of Kirinyaga Rose Njeru, a nominated MCA in the county assembly who has only been employed for six months.

“He was employed six months ago and we expected to celebrate together this festive season,” Ms Njeru said.

Mrs Njeru was taken aback by the incident, which occurred after they had said their night prayers together.

“We had just prayed with the family as we were going to sleep but I was shocked to be called by my son's wife after ten minutes telling me she had killed her husband by 'mistake' with a kitchen knife,’ Rose said.

Ngiriama Ward MCA Erastus Ireri  and nominated MCA Caroline Muriithi arrived at the scene of the incident where they condemned the rising domestic violence incidences in Gichugu Constituency.

Ochuka said Wanja is currently being held at Kianyaga police station as the assistant's chief body is taken to Kibugi funeral home Kutus waiting for postmortem.