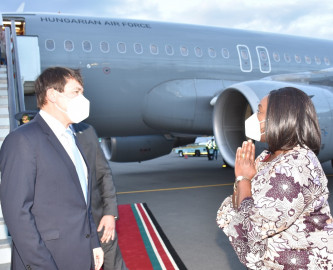 Hungarian President János Áder is in the country for a four-day State visit.

According to the Ministry of Foreign Affairs, Áder is expected to hold bilateral talks with his host President Uhuru Kenyatta aimed at strengthening relations between Kenya and the Central European state.

He is accompanied by Hungarian First Lady Anita Herczegh.