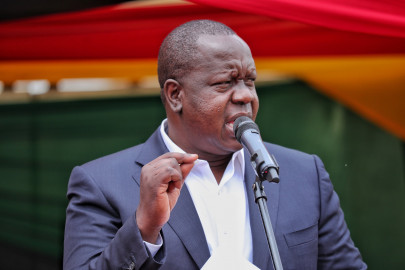 Interior Cabinet Secretary Fred Matiang’i in a past address. PHOTO|COURTESY

Matiangi said that the curfew would apply to the affected areas that have now been classified as ‘Disturbed Areas’.

The Kenyan government has imposed a 30-day dusk-to-dawn curfew on areas affected by insecurity in Lamu County.

According to a statement by the Ministry of Interior, the curfew follows the recent surge of terror attacks in the region.

Interior CS Fred Matiangi said that the order would apply to the affected areas that have now been classified as ‘Disturbed Areas’.

“Incidences of criminal attacks that have led to the loss of seven innocent lives have been reported in Widho Sub-location, Majembeni Location of Lamu County and Lamu Central Subcounty,” read the statement by the CS.

He added: “In accordance with Section 106 (1) of the National Police Service Act, 2011, the National Security Council has declared the following parts of Lamu County as Disturbed Areas and ordered a dusk-to-dawn curfew for a period of thirty (30) days effective Wednesday, January 5th, 2022.”

In Mpeketoni the areas that will be affected by the curfew include: Bomani Location, Pongwe Location, Mpeketoni Location, Bahari Location and Mapenya Location.

In Central Lamu the Hindi location has also been classified as a disturbed area.

Matiang’i revealed that the measures follow the destruction of property and diplacement of people from their homes.

To further contain the runaway  insecurity,  CS Matiang’i ordered the deployment of security forces in the region to beef up security in the region and ensure all illegal firearms are seized.

“The NSC has also directed the immediate deployment of a multi-agency security team to mop-up illegal firearms and activities in the affected areas,” the CS noted.

CS Matiangi’I further implored residents to be vigilant and assist with intel on any criminal activities in the region.

“Residents in the Disturbed Areas are requested to cooperate with the Security agencies and to share information on suspicious persons and activities,” he noted.