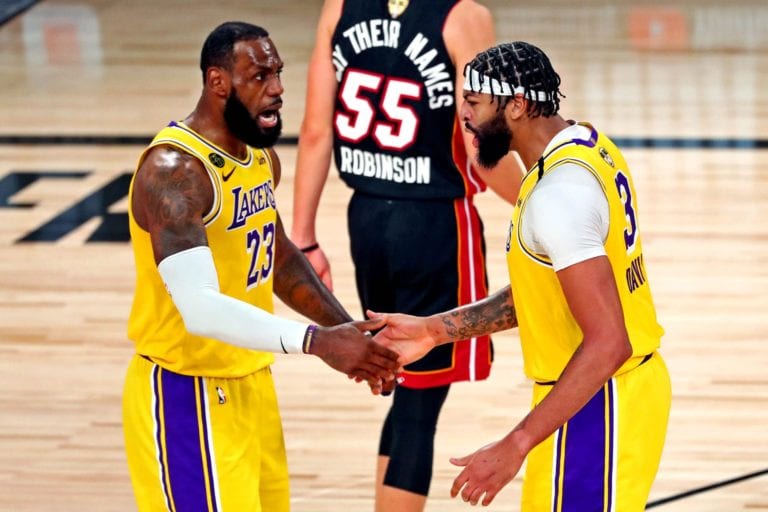 Los Angeles Lakers forward Anthony Davis has been making the most of his first trip to the NBA Finals with a pair of spectacular performances that have left him two wins shy of a maiden championship and with a grip on the series’ MVP trophy.

Davis has decimated the Miami Heat defense in the best-of-seven NBA Finals and averaged 33 points and 11.5 rebounds as the Lakers jumped into a 2-0 series lead. Game Three is on Sunday.

“There’s no one in the NBA that can check him one-on-one,” Lakers guard Rajon Rondo said after Friday’s game.

“When the double comes he’s making great reads, he’s getting the guys the ball on time, on target. And, like I said, when we play through him he’s unstoppable.”

Davis was already one of the NBA’s elite players when the Lakers acquired him last July in a trade with the New Orleans Pelicans, but he has blossomed further while playing alongside LeBron James in Los Angeles.

In the series opener, Davis scored a game-high 34 points, was a perfect 10-for-10 from the foul line and added nine rebounds and five assists. In Game Two, Davis made 14 of his first 15 shots en route to a 32-point night.

“He is one of the most unstoppable players in the league,” said Lakers’ guard Alex Caruso. “I love watching it because I know he is unstoppable whenever he wants to be.

“It’s hard for defenses to cover him just because of his versatility. It’s been a blessing to be his team mate. He takes a lot of the pressure off of us because he is so good.”