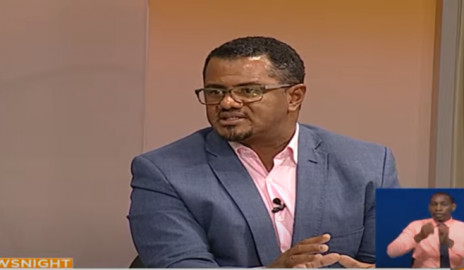 Former Mombasa Senator Hassan Omar during an interview on Citizen TV on January 18, 2022.

On Sunday, police were forced to disperse a gathering of rowdy youth after they physically disrupted proceedings at Jacaranda Grounds in Nairobi during DP Ruto’s rally in the area.

In November 2021, the DP’s caravan was similarly pelted with stones by youth from Kondele, Kisumu County.

The incidents have sparked talks among Ruto’s allies that the government is actively sponsoring political violence in an attempt to muzzle the DP.

While using the 2017 General Election as a reference, the Mombasa gubernatorial hopeful, argued that there is a similar pattern of State complicity when it comes to violence and the use of intimidation to suffocate political vehicles purportedly not affiliated with the government, in this case the DP.

“What is shocking about this turn of events is the perpetrator of these acts of intimidation and State sponsored complicit violence is actually Raila Odinga,” Omar said during an interview on Citizen TV’s NewsNight show on Tuesday night.

To further add to his claims, Omar highlighted how no action had been taken by security agencies in addressing the violence that rocked DP Ruto’s Kondele and Jacaranda rallies or in bringing the perpetrators to book.

“Nothing happened to the Kondele violence and every other time that the UDA party has gone into certain areas that are regarded within the bedroom of Raila Odinga. The latest one is Jacaranda and in fact it triggered the UDA party to now present this matter of State-sponsored violence to the Head of the National Security Council that is at the doorstep of the president,” Omar added.

On Tuesday morning, UDA wrote to President Uhuru Kenyatta expressing concern over the recent insecurity being witnessed at political rallies.

According to Omar the letter was penned with the sole intention of urging President Kenyatta to ensure that the upcoming polls are conducted peacefully and fairly.

“We want him as the president to ensure free and peaceful elections. These triggers that we see lately, the kind of incitement that is being perpetrated by the State that is trying to incite communities against one another, is almost a replay of what we have seen with the Raila axis just that the rules have reversed,” he said.

He similarly took a swipe at legislators allied to Odinga who he claims are celebrating DP Ruto and UDA’s current predicament citing that they have quickly forgotten that they were in the same position during the 2017 polls.

His sentiments were however dismissed by former Police Spokesperson Charles Owino who distanced the former premier from the violence.

According to Owino, who intends to vie for Siaya County’s gubernatorial seat under, said despite being President Kenyatta’s ally, Odinga is not part of the government as such he doesn’t have the power to order regime-sanctioned violence as purported by his rivals.

“Raila Odinga is not a member of the current government. I think it is unfair for the old man when you attack him and try to portray him to be part of the State so I think if you have a problem with the State just face the State,” Owino said.

Owino consequently urged Kenyans to not tolerate divisive politics but instead endorse for unity and peace during the election year.