Gladys Wanga tells off DP Ruto allies over their criticism of the Judiciary: They are sensing defeat 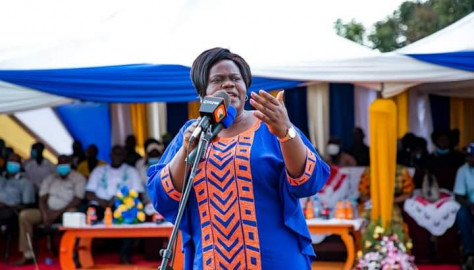 Homa Bay Woman Representative Gladys Wanga has defended the involvement of Chief Justice Martha Koome and the Judiciary in the 2022 election planning affairs.

She has also dismissed Deputy President William Ruto allies’ demands that Koome stick to her constitutional mandate and not be part of the committee as it presents a conflict of interest.

“When you see you are going to lose you start hanging onto things… UDA are sensing defeat, because this is a very straightforward matter,” said Wanga.

“You are planning an election, IEBC is the one responsible for conducting that election, which is a multi-stakeholder process. If you leave the Judiciary out of the election then you expect to take your petitions to court, to a Judiciary that is unprepared.”

She further condemned the DP Ruto’s camp over what she termed as gimmicks to reduce the public’s confidence in the Judiciary.

“I'm sure they understand just how important it is to have a Judiciary that is not just credible, but also seen to be credible. So if you muddy the perception of the Judiciary, you want to take this country into war… you truly do not have the interest of this country at heart,” stated Wanga.

In recent months, DP Ruto’s allies have been against members of the National Multi-Agency Consultative Forum on Election Preparedness such as Cabinet Secretaries Fred Matiang’i and Joe Mucheru, who they claim have already abandoned their roles by making their political allegiances known ahead of next year's elections.

CJ Koome is the chairperson of the consultative forum which brings together Government Ministries, Departments and Agencies (MDAs) involved in preparedness for the August 2022 polls.

According to Ruto’s camp, Koome’s duty lies in ensuring that the Judiciary serves all Kenyans fairly and as such, she shouldn’t be part of the committee as it presents a conflict of interest.

Wanga now wants Ruto’s allies to be clear about who in particular they have problems with, instead of throwing mud at the third arm of government as a whole.

“Don't go for the Judiciary as a scapegoat to try and attack other people whom you are not naming but you feel have taken political sides. Don’t drag the CJ into this matter, she is not responsible for anybody else in that table,” she stated.