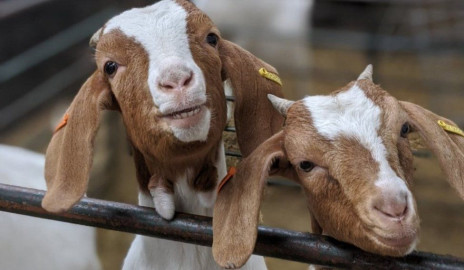 A group of farmers in Burumba, Busia County, are counting losses following the death of their livestock two weeks after a free vaccination drive that was conducted by the County Government of Busia veterinary department.

According to the farmers, the dairy goats were vaccinated against Foot and Mouth and Lumpy Skin Disease.

Milton Andanje, a local in Burumba, is among livestock farmers who have lost more than three goats.

Symptoms presented, according to the affected farmers, are lack of appetite, fever, miscarriage and high temperatures that result in sudden death.

"I am worried that the disease may sweep all my stock. Efforts to have them vaccinated has turned out to the sudden loss of my goats, I used to sell milk that fetched me good money. We need to be compensated," said Andanje.

He said locals have since reached out to the county livestock for help.

The farmer said he was planning to sell the stock to help him raise school fees for his children before the unfortunate incident.

“I have lost three goats, that loss amounts to a tune of approximately Sh120,000. I normally depend on the livestock for survival, but this disease has ruined everything for us,” David Kokonya, another farmer said.

“Surveillance on the disease is ongoing as we wait for results, the vaccination drive was conducted across the County but we are wondering why only one area was affected," Ogendo said.

He revealed that the department received information about the deaths on Thursday, October 7, 2021.