OPINION: Time to end impunity for crimes against journalists is now, let’s get to it 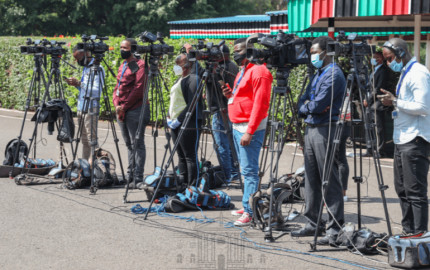 Every year on November 2, the world observes International Day to End Impunity for Crimes against Journalists (IDEI). The day was proclaimed by the UN General Assembly on December 2013 and the date selected in remembrance of the assassination of two French journalists in Mali that same year.

Between 2006 and 2020, over 1,200 journalists have been killed for reporting the news. In nine out of ten cases, the killers go unpunished. Impunity leads to more killings and is often a symptom of worsening conflict and the breakdown of law and judicial systems according to UNESCO.

Impunity for crimes against journalists is a global problem. This fact was best demonstrated in 2020 when journalists and the media suffered greatly at the hands of their governments keen on controlling the narrative on the COVID-19 prevalence, response, and death rates.

Across the world, there were instances of a deliberate effort to control journalists’ work such as in Brazil where President Jair Bolsonaro condemned journalists covering the epidemic.

Iraq, for example, suspended the license of some news agencies while the United Arab Emirates introduced a hefty fine on journalists. In Jordan, security forces arrested a TV company’s owner while Turkey jailed a host of journalists.

In Zimbabwe, a freelance journalist was beaten up by the police and forced to delete video footage on his camera after filming a police operation to disperse people during the lockdown in Harare.

Here in Kenya, and according to Article 19-Eastern Africa, between May 2020 and April 2021, Kenya recorded at least 51 cases of attacks against individual journalists, nine being female journalists. According to the organization, the attacks varied from threats, intimidation, harassment both online and offline, physical assaults, invasion of media houses, and in some extreme cases, killings. Police officers led in these crimes against journalists and media workers.

Whereas the victims [journalists] are said to have reported assaults to the police, there is almost no case or evidence to show that a single police officer was ever arrested and prosecuted for his/her crimes. It is this culture of impunity that perhaps has inculcated the lack of accountability from the security agents that consider journalists as criminals rather than messengers.

According to the Reporters without Borders’ 2021 World Press Freedom Index evaluating the state of journalism in 180 countries and territories, Kenya was ranked 102 - lower than Ethiopia – among where crimes against journalists are very high. The press freedom situation was classified as “problematic” by the organization.

Whereas impunity for crimes against journalists appears as a new problem, it is not. Journalism in Kenya has suffered tremendously but it is in the 1980s and 1990s that it was at its lowest.

As noted by George Ogola in a journal article, “before 2009, Kenya did not have a press law, making both media workers and organizations particularly vulnerable to state intimidation. Media freedom was provided for in section 79a of the con­stitution, but it remained subject to the provisions of the penal code, which gave the government power to clamp down on the media in the interest of public morality, public order, and national security.”

Between 1988 and 1990, nearly 20 publications were banned and their editors forced into exile, jailed, or fined.

It would be until 2002 when Kibaki’s government opened up the media space that conditions of practicing journalism improved. Media would eventually earn its rightful place under Article 34 of the Constitution (2010). The Constitution also entrenched other liberties such as freedom of expression and right to access information under Article 33 and 35 respectively.

And so, from the dark days of constant threats, harassment, and intimidation by the government, to unfettered control and mistrust by the ruling elite, and oppressive rules coupled with a lack of legislation that expressly defended the workings of the journalist, the media has made great strides in professionalizing its operations.

That be the case, the media in Kenya, according to Internews Network, is still facing different pressures from different areas — legal threats, economic challenges, fluid audience behavior, and [now] the COVID-19 pandemic.

That apart, the media also faces statutes that prohibit media progress through very strong anti-media laws that emasculate media freedom. There exist 13 other laws in the country that also purport to guide media operations. These include the Kenya Films and Stage Plays Act of 1963; Computer Misuse and Cybercrime Act 2018, The Kenya Broadcasting Act, Cap 221 of 1988; The Copyright Act, Cap 130; 1966; The Books and Newspapers Act, Cap 111; 1930; The Defamation Act, Cap 36; 1970.

It’s imperative to note that the Media Council of Kenya and other stakeholders have raised the issue of urgency to amend the KBC Act, Public Order Act, Books and Newspaper Act, and Computer Cyber Crime Act. The remaining also needs to be amended.

But as we celebrate this day and condemn crimes and atrocities against journalists, we must admit that the media isn’t without blame. In 2007/2008 for example, Kenya suffered heavily during the post-election violence and sections of the media were accused of being enablers, with one journalist being among six suspects indicted by the International Criminal Court (ICC). He was, however, later acquitted.

As we condemn the crimes against journalists and call for justice to prevail for crimes caused against journalists, we must also address the insolences that foster the culture of impunity among state operatives and the political class.

Journalists must reevaluate their place in the society - that of speaking truth to power without fear or favor. Kenya’s media recently failed that test during the ‘Pandora Papers’ leak that contained files of several leaders with offshore accounts holding billions. The leaks, which also implicated the first family, were given acres of space and extensive coverage in international media. In Kenya, shoddily, quickly and poorly researched articles were published and in one or two days, the media stopped highlighting the story. A clear indication of fear of rattling the first family.

Onwards, to end impunity for crimes against scribes, journalists must start by cleaning their own house and acting beyond reproach. Two, journalists like all professionals, need to work in a safe environment. This is not just a responsibility of the journalists and media stakeholders but for everyone, including the government, and the ordinary citizens, for without journalism, there is no freedom of expression or right to access information or democracy.

Lastly, journalism isn’t a crime and journalists aren’t criminals. For every journalist killed, the truth is killed.

The author is a Kenyan journalist, writer, and communication specialist with a special interest in media law and political communication. He remains a close observer of, and participant in, Journalism and the Media.