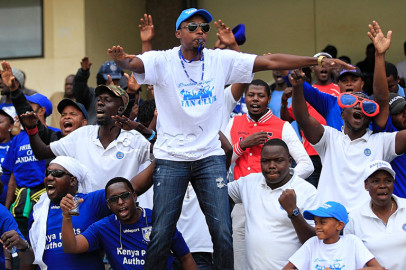 Bandari FC fans cheer during their FKF Sportpesa Shield final at the Kasarani stadium in Nairobi on June 1, 2019. Photo/Sportpicha/Citizen Digital.

Bandari FC team manager Albert Ogari has decried the two weeks football break imposed by the Caretaker Committee formed by Sports Cabinet Secretary Amina Mohamed to manage football in the country noting that it will hurt the good momentum his side had built.

The committee suspended five national leagues for a period of two weeks in order to familiarize themselves with the running of the league as well as meeting stakeholders.

The top tier men’s league, the Football Kenya Federation Premier League, Kenya Women’s Premier League, National Super League and division one leagues, both men and women were all put to a halt as a result.

Ogari said, "Of course it will reduce our usual game speed but we hope it will not take much longer before we return to action.”

Prior to the break, the dockers had been in sound form, winning four of their six matches, losing one and drawing an equal number and Ogari is of the view that the break could halt this fine run.

However the team has been busy with their training and Ogari reckons they’ll be ready for action when the Ringera-led team gives the nod.

"The good thing is that we have been training all along so that we cannot be caught off guard," he added.

After a one-all-draw in their last match against Kakamega Homeboyz which was dogged by chaos in Bukhungu, Bandari are scheduled to play away to Nzoia Sugar in their next fixture when the league resumes.

Action is expected to resume this week after the committee met with team's representatives to chart the way forward.