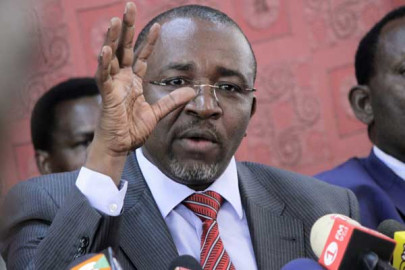 Speaking to Citizen TV on Monday, Linturi stated that it is only a matter of time before  the alliance breaks and reveals their hidden agenda, claiming that some of its co-principals are spies for other political camps.

“I can tell you, without a doubt, that some of the OKA principals are spies,” Linturi stated, “There are two spies within that group who report to different places, but in a matter of time we will know. They will not be together, that I can tell you.”

The senator further bashed the Kalonzo Musyoka, Musalia Mudavadi, Moses Wetangula and Gideon Moi-led outfit for what he termed as inability to rake in votes in the 2022 General Elections.

“Let us be serious, politics is about numbers. What numbers is OKA bringing, without casting doubt on the leadership and its credibility?” he posed.

Linturi,  however, refused to divulge details into the alleged allegiance to other camps by some of the unnamed OKA co-principals, saying Kenyans will see for themselves in just a matter of weeks.

“We want to wish them well, let them continue… Just let what I say come into fruition probably after some few weeks.”

OKA co-principal Musalia Mudavadi has recently been forced to come out and set the record straight on the situation between him and fellow co-principals after not having been spotted with them for a while.

On November 14, Mudavadi assured Kenyans that there is no rift between him and his OKA amid speculations that he might not be on good terms with the others Mudavadi was notably absent from recent OKA rallies where Wetangula, Kalonzo and Moi took their campaigns.

However, Musalia stated he is recovering from illness and has been advised by his doctor to avoid public rallies.

He further announced that OKA will name its presidential candidate early next year, pushing the timeline further from the December 31 deadline the alliance co-principals had given before.