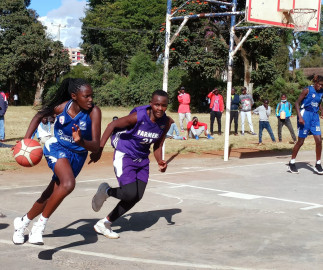 Sparks were in their all-conquering form establishing a 24-17 lead in the first half before closing out the game 48-34 at the final buzzer to finish as the best team in the three-day round-robin tournament.

Head coach Maurice Obilo is confident they will hold their own against tougher opponents in the new league, having won the playoffs without his key players who were held up with end-of-semester examinations.

” Am proud of what my girls have achieved for this year’s tournament despite the challenges that limited our capacity to go full-throttle.

“We qualified as champions and it can only get better for us. We understand that there is little time left before the new season tips off so our focus now is on how we can work on our faults before then.”

Butere Girls, Swish, and runners-up Safe Spaces will join them as they all earned the four available promotion slots.

His Safe Spaces counterpart Peninah Musyimi whose side was forced to settle for second after coming short at the final hurdle is confident they will go toe-to-toe with the new league’s best.

“Even if we did not win the tournament we go back with our heads held high since we are among the four teams that were promoted.

“It is a good achievement for my players as it will motivate them into believing they can achieve even better,” said Musyimi.

In the men’s final Malindi-based Moischers Nets were awarded a 20-00 walkover after other finalists Dagoretti High failed to show up.

Nets had brushed aside Jomo Kenyatta University of Technology (JKUAT) 46-32 while Dagoretti edged out National Bank of Kenya (NBK) 50-44 in a nervy semi-final that was interrupted by rains.