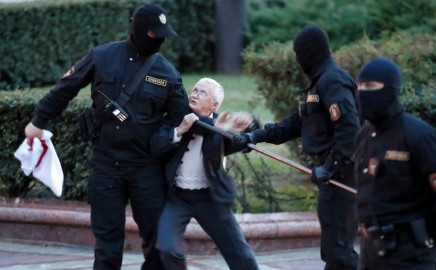 The United States, the European Union, the United Kingdom and Canada have announced a new round of sanctions against Belarus officials and entities, citing the government’s “ongoing attacks on democracy, human rights, and international norms, and for their brutal repression of Belarusians both inside and outside the country,” U.S. Secretary of State Antony Blinken said in a statement.

The U.S. is targeting 32 officials and entities, including state-owned enterprises that support the government of President Alexander Lukashenko. Also sanctioned is Lukashenko’s son, Dmitry.

The U.S. also placed restrictions on the Belarus government’s ability to borrow money.

Lukashenko has been cracking down on political dissent since the August 2020 elections, which the U.S. and EU called fraudulent. It is also accused of using migrants as political weapons against its neighbors, such as Poland.

“Today’s actions demonstrate our unwavering determination to act in the face of a brutal regime that increasingly represses Belarusians, undermines the peace and security of Europe, and continues to abuse people seeking only to live in freedom. These sanctions are also in response to the Lukashenka regime’s callous exploitation of vulnerable migrants from other countries in order to orchestrate migrant smuggling along its border with EU states,” Blinken said.

The EU sanctions are against officials involved in the migrant crisis, as well as against two airlines — state airline Belavia and Syrian airline Cham Wings — which it says are bringing migrants to Belarus to make the crisis worse.

The U.K. announced it will freeze assets of state-owned OJSC Belaruskali, a large manufacturer of potash fertilizer. Canada said it would sanction the 32 individuals and entities named by the U.S.

“Our position is clear,” Blinken said. “The United States calls on the Lukashenko regime to end its crackdown on members of civil society, independent media, the political opposition, athletes, students, legal professionals and other Belarusians; to immediately release all political prisoners; to engage in a sincere dialogue with the democratic opposition and civil society; to fulfill its international human rights obligations; to stop its coercion of vulnerable people; and to hold free and fair elections under international observation.”