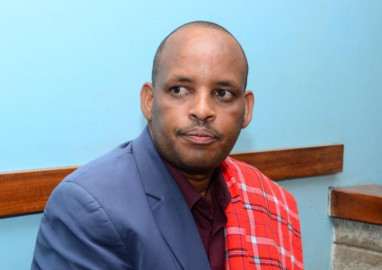 Laikipia North Member of Parliament Mathew Lempurkel has moved to court to appeal against the one-year prison sentence he was slapped with for assaulting the current Laikipia North MP Sarah Korere.

In the case, Lempurkel was accused of assaulting Korere on November 21, 2016 at the office of the late former Interior Cabinet Secretary Joseph Nkaissery at Harambee House in Nairobi.

Senior Principal Magistrate Hellen Onkwani, in her November 5th ruling, sentenced the ex-legislator without the option of a fine.

According to court papers seen by Citizen Digital, Lempurkel “willfully and unlawfully assaulted Sarah Korere by slapping her on the left cheek and kicked her on the lower abdomen thereby occasioning her actual bodily harm.”

Lempurkel’s lawyer Saitabao Kanchori argues that the court made a mistake in punishing Lempurkel whereas evidence shows that Korere was the aggressor in the altercation.

“The trial magistrate erred in law and in fact by totally disregarding the unchallenged evidence of an eyewitness who testified under oath how Ms. Lekorere accosted and attacked Mr. Lempurkel in the presence of over 20 other persons allied to her,” says Kanchori in court documents seen by Daily Nation.

He further argues that the magistrate downplayed the evidence that Korere and Lempurkel were political rivals, adding that Lempurkel’s lawsuit was politically motivated.

Lempurkel now wants the High Court to release him on bail, pending the hearing and determination of his appeal.