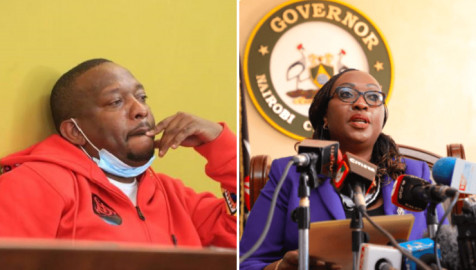 Former Nairobi Governor Mike Sonko’s application to have the city’s Deputy Governor Anne Kananu Mwenda barred from assuming the top job at City Hall has been dismissed by the Appelate Court, paving for the latter’s swearing in.

Sonko moved to court in June 2021 to petition Mwenda from assuming office after he was impeached by the senate in December 2020. Sonko filed a petition against Mwenda to ensure she didn’t take up Nairobi County's gubernatorial office until his initial appeal was determined.

“Sonko is apprehensive that should Mwenda become Governor of Nairobi County, then his appeal would be rendered nugatory; and that even if he was to succeed and the Court was to find that his impeachment was improper, then it would mean that he would not be able to return to his former position,” official documents read.

“In that application, the Court gave a conservative order for a limited time of four months as the applicant was still in office. That is not the case here. In this case, the applicant has already been removed from the office of Governor,” said the Court of Appeal.

He similarly argued that swearing in Mwenda would be a violation of his constitutional rights but his sentiments were not shared by the Appelate Court.

“If the court hearing the substantive appeal find that there has been a violation of his political rights, then those violations, since they will be personal to him, can be vindicated by way of an order of damages, or such other order that the court may deem fit,” the court decreed.

The three-judge consisting of justices W. Karanja, J. Mohammed and J. Lesiit similarly pointed out that Sonko has not been in office for at least 10 months as such he is effectively no longer the Governor of the County.

They also ruled that Sonko’s wish to have Kananu restricted from assuming office was never mentioned in his initial appeal nor did the judgement issued address the issue.

“Ultimately, for the foregoing reasons, our finding is that this application does not meet the threshold set for applications under Court of Appeal rules.”