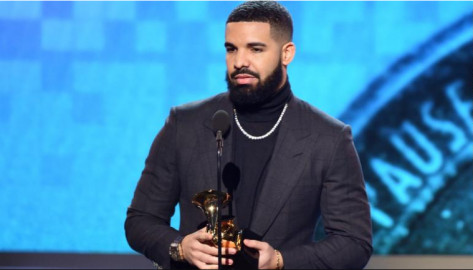 The sources said the request to pull out of consideration was made by the rapper and his management but gave no reasons for the move. The Recording Academy website was being updated on Monday to remove Drake's nominations from the Grammy list, the sources said.

Drake, whose "Certified Lover Boy" was one of the top-selling albums of 2021, has a contentious relationship with the Grammys.

Last year, he criticized the Grammys for entirely shutting out fellow Canadian The Weeknd from its nominations list. In 2019, Drake declined to perform at the ceremony then criticized the awards show from the stage.

"I wanna let you know we're playing in an opinion-based sport not a factual-based sport," he said while accepting the Grammy for his single "God's Plan."

"This is a business where sometimes it's up to a bunch of people who might not understand what a mixed race kid from Canada has to say or a fly Spanish girl from New York or anybody else," Drake added.

Grammy nominations are chosen by members of the Recording Academy and voted on by members. Jazz musician Jon Batiste led nominations this year with 11 nods, followed by Justin Bieber, Doja Cat and H.E.R.

Winners will be announced at a ceremony in Los Angeles on January 31.