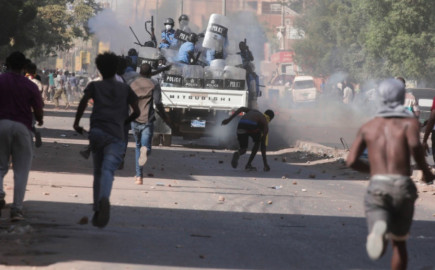 Young men confront the police during a protest against a military coup that ousted a civilian government last month, in Khartoum, Sudan, Nov. 17, 2021.

The U.N. Commissioner for Human Rights has denounced the killing of Sudanese demonstrators protesting the country’s October 25 military coup.

Sudanese security forces fired live ammunition at protesters on Wednesday, killing 15 in the deadliest day of violence since the takeover and increasing the death toll during pro-democracy protests to 39.

The U.N.’s Michelle Bachelet said in a statement Thursday that her office has repeatedly asked the country’s security forces and military “refrain from the use of unnecessary and disproportionate against demonstrators.”

The U.N., citing reliable medical sources, said more than 100 demonstrators were wounded in Wednesday’s protests, including 80 who were shot in their upper bodies and heads.

The protests were the latest marches held by Sudan’s pro-democracy movement since a joint civilian-military government was ousted in the military takeover.

The coup occurred after weeks of escalating tensions between military and civilian leaders over Sudan’s transition to democracy.

Sudan’s Army Chief, General Abdel Fattah Al-Buhran, said he dissolved the joint civilian-military council and the government due to "political quarrels that were threatening the security of the country.

The coup has threatened to derail the process that began after the ouster of longtime autocrat Omar al-Bashir in a 2019 popular uprising.