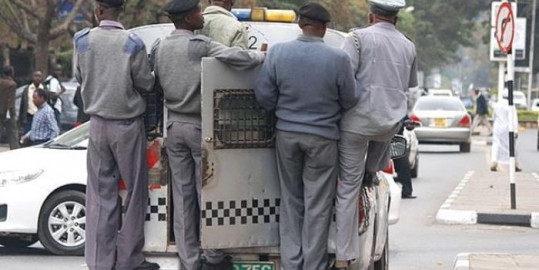 This follows a bid to rebrand Nairobi's Inspectorate Department to get rid of corruption and brutality associated with county officers and to restore professionalism in the department.

According to the county Security and Compliance Chief Officer Dr Mark Leleruk, the move is part of ongoing reforms in the department.

“We are equally embarrassed because professionalism is low and we admit. That is why there is need to replace the current titles and call them constables and other respectable titles,” he said.

At the same time, Dr Leleruk revealed that they have revived the Ksh.200 million Inspectorate training school in Dagoretti which will be dedicated to training the officers.

“We have revitalized the officers’ training school at Dagoretti where we will use to train the officers going forward,” he said.

At the end of the exercise, the new enforcement officers along with the re-trained inspectorate personnel will be mandated with patrolling city streets to rid them of hawkers, parking boys and drug peddlers and goons who have taken over public toilets.

Similarly in June, the Nairobi Metropolitan Services (NMS) and City Hall partnered with the National Police Service (NPS) to train at least 1,000 of the officers with modern skills to transform the department into a service and not only an enforcement unit.

The move however, comes at a time when the public together with Nairobi's MCAs has been decrying on the increasing cases of arbitrary arrests, harassment and extortion of hawkers by the Kanjo officers.

In July, a hawker lost all his teeth and had his jaw broken after he was brutalized by the officers over failing to raise a fee of Ksh.100.