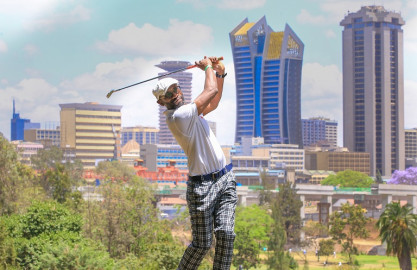 A golfer follows the fligth of his tee shot during the Kenya Railway Golf Club of the 2021 NCBA Golf Series on October 16, 2021. (PHOTO/Courtesy)

The ultimate showdown in the 2021 NCBA Golf Series is set to take place tomorrow, Friday, December 3, 2021, at the Karen Country Club when the par-72 course hosts the Series' Grand Finale.

The event will be the 23rd on the 2021 NCBA Golf Series Calendar, where 105 players who qualified to play through the 21 seniors' events in the Series are expected to battle it out for the ultimate honour of being crowned the overall Series champion.

The playing field comprises five top finishers – overall winner, men's winner, men's runner-up, ladies' winner, and ladies' runner-up - from each of the 21 events. Among them are three junior golfers who emerged overall winners at their respective clubs' legs of the Series.

Nathan also emerged victorious at Karen during the two-day Junior Golf Tournament held in August when he took the winner's spot in the 12-year-olds category.

The Series, which teed off in January this year at the Thika Golf Club, has seen the participation of close to 3,000 golfers taking part across the participating golf clubs, making it one of the most successful golf series in the 2021 Kenyan golf calendar.

For the Grand Finale, NCBA Group has planned an elaborate event that will crown the year-long Series. The event will feature a series of activities culminating in an elegant gala event to award and celebrate the winners.

"We are thrilled to be holding our Grand Finale this Friday as a culmination of what has been an extremely successful golf series.

“To have the top players from across the Series battling it out for top honours at one of Kenya's most pristine golf courses is the pinnacle of all the work that the entire team behind this Series has put into ensuring that the Bank's vision for the sport comes to fruition.”