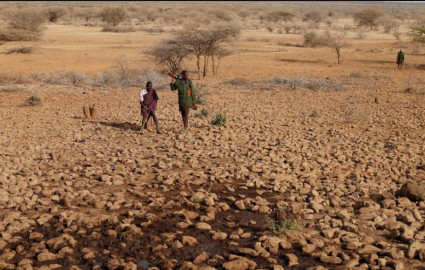 At least 23 counties are experiencing drought in the country, with plans already in place to help them overcome the disaster, government spokesperson Col. Cyrus Oguna has revealed.

The counties have been classified into three categories according to the severity of the food distress being experienced, namely; high risk, moderate and low risk areas.

Kajiado, Laikipia, Makueni, Meru, Taita Taveta, Tharaka Nithi and West Pokot have been listed under the moderate category while Embu Nyeri and Narok fall under the low risk class.

According to Col. Oguna, distribution of food to the 13 high risk areas has already commenced.

“The government continues to provide support to alleviate the impact of drought in the affected parts of the country. As government, we wish to inform our people that we have mobilized sufficient food stocks to be distributed to all the affected until the situation normalizes,” he said in a statement.

“Several interventions have been rolled out by the government which includes hunger safety net cash transfer and Inua Jamii programs and food distribution.”

He also revealed that the government has set aside Ksh.2.4 billion to help in food relief activities in October and November, on top of the Ksh.1.5 billion that President Uhuru Kenyatta had allocated in his Mashujaa Day address to cater to livestock in the affected areas.

Plans to distribute food to the remaining counties are currently underway with distribution anticipated to commence soon.

“The government will continue with efforts to mitigate the current drought situation and assures Kenyans that no amount of effort shall be spared to provide necessary intervention to address the drought situation in the country,” Col. Oguna stated.