Uganda sends ground troops into the Democratic Republic of Congo 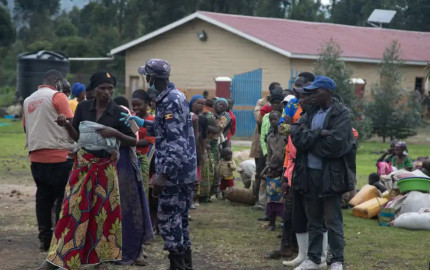 FILE - A Ugandan police officer speaks to a group of asylum seekers from the Democratic Republic of the Congo at a transit center in Kisoro, Uganda, Nov. 10, 2021. Uganda is deploying troops in the DRC in a joint operation against ADF rebels.

Uganda's military has confirmed sending troops into the Democratic Republic of Congo (DRC) against Allied Democratic Forces (ADF) rebels. Uganda blames the ADF for a series of bombings in the country. But analysts say inviting the Ugandan army into the DRC could raise tensions with neighboring Rwanda.

Uganda has sent ground forces into the Democratic Republic of Congo in the ongoing armed operation against the Allied Democratic Forces rebel group.

Brigadier Flavia Byekwaso, the Uganda army spokesperson, confirms to VOA that after it used artillery and airstrikes early this week against the ADF, Uganda sent in ground troops.

"And I can confirm at this point in time that they’ve already entered into their bases," said Byekwaso. "Part of our end set is to make sure that we pacify that part of Congo. We make sure that we get rid of the terrorists that are there. So, the attainment of this is going to determine for this operation how long it’s going to take.”

The Ugandan army has not revealed how many ground soldiers have been sent into the DRC.

Aside from ADF rebel forces, a militant group from Rwanda — the Democratic Forces for the Liberation of Rwanda — have also been active in the Eastern DRC, forcing Rwanda to deploy its forces against the FDLR. Analysts fear that may worsen the already shaky relation between Uganda and Rwanda, which are operating in the same region.

Pierre Boisselet, coordinator of the Kivu Security Tracker, says while the deployment of the Ugandan army has caused mixed reaction, the military intervention many not solve the many root causes of the conflict, but more importantly, now uproot the ADF, which has been in the DRC for two decades.

"They have to do with the failings of the Congolese state mostly. But also with the rivalry of the various neighboring countries of the DRC and their competition for influence over Eastern DRC," said Boisselet. "And so, inviting them to operate directly in the DRC is also a significant risk.”

But Muyaya Patrick, the Congolese government spokesperson speaking to VOA, says the decision by President Felix Tshisekedi to let forces of neighboring countries operate in the DRC is to bring peace and economic development to its people.

"I don’t think there’s going to be any difference on what we are doing now with Uganda, with the operations taking place along the border of the two countries," said Patrick. "What we are doing with Uganda, we put the same mechanism in place with Rwanda, and we did the same from Burundi. So, everybody then (can) be sure that every country (is) working to bring peace, to bring more security for our population and for ourselves.”

In 2000, in a six-day battle between Ugandan and Rwandan forces around the Congolese city of Kisangani, at least 150 civilians were reported killed. This reportedly led to the 1998-2003 war in which Uganda was fined $13 billion by the International Court of Justice in 2005.