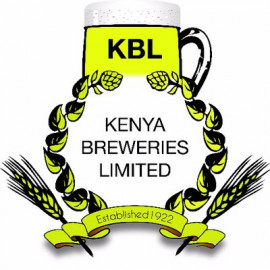 Kenya Breweries Limited (KBL) on Friday, November 26, 2021, launched a competition for the design of its new logo as it looks to mark its 100th birthday in 2022.

The competition dubbed ‘KBL Still Got Skillz’ is open to design artists from Kenya aged between 21 and 25 years and is intended to culminate in a next-generation logo for one of Kenya’s oldest companies as it marks its centenary.

The artists have been invited to submit their artistic impressions of how a Kenya Breweries Limited (KBL) logo would look like from November 29 to December 10, 2021. The submissions ongoing for 12 days can be made by an individual or a group of up to four people.

The artists with the winning submission will win a cash prize of Ksh.1 million and an opportunity to intern at J. Walter Thompson (a Scangroup creative agency), where they will work with a team of experienced creative and advertising experts.

The second and third placed will each receive a cash prize of Ksh. 500,000 and Ksh. 250,000 respectively. The top three designs will be selected by judges after a hackathon where the top 20 will refine their submissions under the guidance of experienced professionals in the design world.

KBL Managing Director John Musunga said the model was successful as it supports creative art in line with the company’s rich history in supporting the youth through the promotion of sports and culture.

“The challenge for the youth, those between 21 and 25, who are the eligible ones for this as they are not likely to be employed or experienced the tutelage of the masters of the craft, is to give KBL a modern logo that tells the world that KBL has been here for 100 years and it will be around for the next 100 years,” said Mr Musunga at the event to launch the competition.

The MD said the company, which was among the sponsors of the Kenyan team to the Olympics earlier this year, felt it needed a fresh logo as it looks to mark a significant milestone in its existence.

“We aim for dual outcomes – a logo that reflects who we are as a company and a group of creative young men and women who can get on their way on a career path and experience the world of work,” said Mr Musunga.

East African Breweries Limited Corporate Relations Director Eric Kiniti said the competition is a continuation of the work the company has done over the years with artists to grow its brands.

“We are not only happy that we have been around that long but that KBL has made an impact on Kenya, Kenyans and the world at large. KBL remains one of the significant contributors to Kenya’s Gross Domestic Product, and we now contribute 1% of that and 5% of Kenya’s Budget,” said Mr Kiniti.

Today, more than 80% of KBL’s raw materials are sourced locally, and among these are more than 40,000 farmers who supply the company with sorghum, which it uses to brew the popular Senator Keg.

A similar logo competition dubbed ‘Got Skillz?’ in 2019 culminated in the design of a new logo for East African Breweries Plc, the holding company of which KBL is a subsidiary.

Elvis Otieno, who was a student at Multimedia University at the time won the competition and after an internship period, has built his career to become an Art Director at Scanad.

“I think the best thing about it was not winning the prize but the internship that came with it, which turned into a job and a life-changing experience that someone else should also get,” said Mr Otieno.

The Art Director also had a few words of advice for young artists going into the competition.

“I’d urge everyone to submit whatever they have. I believe that art doesn’t have to be perfect. It’s the idea behind it that matters. For those wishing to submit designs for this competition, just submit what you have. It will be alright as long as you have given it your all,” said Mr Otieno.