Corazon Kwamboka opens up on her battle with Endometriosis 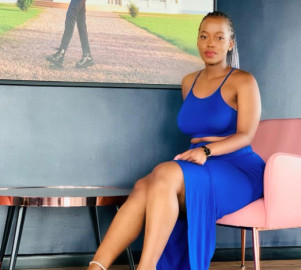 Corazon Kwamboka, a lawyer and social media influencer, has spoken out about her struggle with endometriosis, a painful condition that causes pelvic pain during menstruation as well as a risk of infertility.

Kwamboka who was speaking to the Daily Nation said she was not sure she would be able to start a family on accoun of her condition.

She recalls finding out about her condition in 2018, after suffering through years of painful menstrual periods that began when she was in high school, around the age of 16.

“I always had to go to the sick bay because I could not walk and had to always be on painkillers. It was a horrible experience that I never looked forward to.”

Corazon disclosed that her mother had warned her that she was at risk of being infertile due to the painful periods she would get, however she did not take her seriously.

“I remember my mother telling me to see a doctor for medical intervention, and that people who had such periods are at risk of infertility, but I thought she was only feeling sorry for me.”

Endometriosis, being a largely misdiagnosed condition, Corazon had to see two doctors after finding out about her condition in 2018 and finally got a laparoscopic surgery.

“I reached out to my cousin who had a similar condition, and she referred me to her gynecologist, whose recommendation and insistence on a second scan led us to find out that I had two cysts. He advised that I had to go under the knife, and I eventually got laparoscopic surgery in January of 2019.”

The mother of one, albeit with baby number two on the way,  also disclosed that she got pregnant in 2019, soon after she got the surgery.

Despite the condition, Corazon says she has been grateful for her son and is beyond happy with the news of her second child which she announced on Instagram Sept 5.

“With or without the condition, being a mum has been the best journey I’ve ever taken…”

“I look forward to seeing my children grow up happy and achieve everything they want to.” Corazon added

Corazon is not the first Kenyan celebrity to shed light on endometriosis.

In 2018, radio personality Jambhy Koikai revelead that she had been battling thoracic endometriosis for over 15 years and had received a total of 19 surgeries in 19 years.

Since then, Jambhy has been vocal on all social media platforms, raising awareness on endometriosis since many cases just like hers are treated as normal painful cramps.