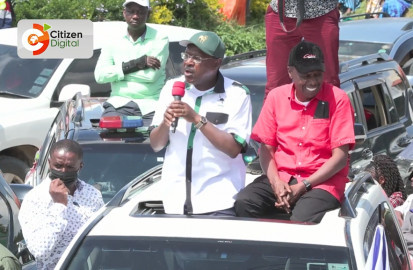 One Kenya Alliance (OKA) Principals on Tuesday took their campaigns to Taita Taveta County where they rallied voters behind them with an array of promises should they form the next government.

KANU party leader Gideon Moi, who is one of the OKA Principals, hinted at the possible revival of the free school milk programme in an effort to boost enrolment among primary schools in the country.

The programme was initially introduced in 1978 following the death of Mzee Jomo Kenyatta by then-president Daniel Arap Moi. Within a year, school enrolment rose from 2,994,991 in 1978 to 3,698,216 in 1979 as a result of the programme, aptly dubbed Maziwa ya Nyayo.

The programme, which was in place for two decades, saw the late Arap Moi etch himself into Kenyan history, with a number of songs crafted to recognize his efforts in promoting education in the country.

The high demand for milk also became a boon for producers of the commodity, who had to up their supply in order to meet the desired target.

Speaking in Taita Taveta County, Moi underscored the importance of free education and insisted that education would be a priority if any of the OKA principals clinch the presidency at next year’s polls.

“Education is key and without it, there are lots of problems. We are aware of this and the OKA government will ensure that we have free and compulsory education for all,” Moi said.

While echoing his co-principal’s statement, Moses Wetangula, on his part, highlighted how health would also be a focus of the OKA agenda.

Wetangula said should the alliance win the elections, they will ensure all Kenyans including sex workers receive NHIF medical cover.

“The average Kenyan is suffering from two things. The first is educating children and the second is health,” Wetangula said.