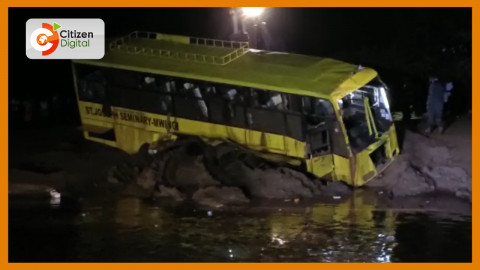 The wreckage of a catholic church bus that crashed into the Enziu River in Mwingi on Saturday, killing at least 33 people, has been recovered from the swollen river, while the search for the bodies of those believed to have died continues.

The mangled wreckage was pulled from the river on Sunday afternoon after hours of coordinated multi-agency efforts involving, among others, the county government, the navy, the NYS, and civilians.

Hundreds of local residents camped out by the bank all day Sunday, as divers scoured the area for bodies of those who have yet to be found.

The death toll stood at 25 as of Sunday afternoon, following the recovery of two bodies.

As the day progressed, more bodies were discovered and recovered, bringing the death toll to 33 as of Sunday evening.

The ill-fated St. Joseph’s Seminary bus was ferrying more than 30 people to a wedding on Saturday when the accident occurred.

Reports say that 22 of those reported to have died in the accident were members of the St. James Good Shepherd Catholic church in Mwingi, Kitui County.