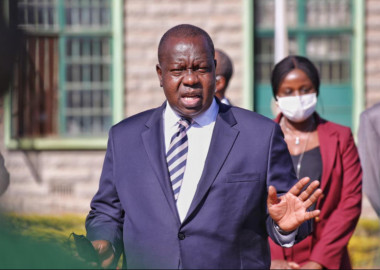 The government has announced heightened vigilance across the country following the escape and subsequent recapture of three Kamiti Maximum Prison terror convicts.

Interior Cabinet Secretary Dr. Fred Matiang’i, speaking on Thursday as he witnessed the reincarceration of the trio at the prison, said the government is ready and has directed efforts at surveillance to detect and deal with any potential threats.

He urged members of the public to brace themselves for “inconveniences” that may arise from the heightened vigilance, but that he described as a necessity informed by security threats.

"The mistakes that were committed here on Monday are unforgivable. It was a very frightening and horrific dereliction of duty. What happened here was a rude awakening that there are certain lapses that we need to deal with," he said.

"We have raised the level of alertness and effected far-reaching changes. You are going to notice that we have changed the screening systems at the airports and the SGR. We are not out of the woods yet. We are in an unusual space because of what is happening around us. Please let us be careful and watchful."

The CS praised security agents for their swift action, describing the escape as a vital lesson learnt in securing prisons and other correctional facilities in the country.

He however reiterated that any prison staffers found to have been complicit in their work, thereby allowing the escape to happen, will face the full force of the law.

“We have officers that we suspect failed in their duties, we will ensure that the law takes its course and we bring all those involved to justice," he said.

He was flanked by Inspector General of Police Hillary Mutyambai who said the escapees were captured deep in a forest and are suspected to have been headed to Garissa, then eventually Somalia.

The three terror convicts, who have been on the run after escaping on Monday, were captured in Mwingi, near the border of Kitui and Tana River counties after a massive manhunt conducted by a multi-agency special team.

They were flown back to Kamiti in a police helicopter amid tight security by officers from the Anti-Terrorism Police Unit (ATPU) and are expected to face fresh charges of attempted escape from lawful custody.