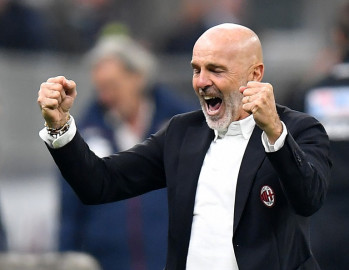 AC Milan coach Stefano Pioli has signed a new contract to stay at the club until 2023, with an option for a one-year extension, the Serie A side confirmed on Friday.

"I'm proud of the work we've done until now, with the good relationship I have with the management, with the growth of my players and with the passion displayed by everyone working at this incredible club," Pioli said.

Pioli has impressed in northern Italy since taking charge in 2019, steering the Italian giants back into the Champions League this season for the first time since the 2013-14 campaign.

Their second-placed finish in Serie A last season under Pioli was Milan's highest since 2012 when they were coached by the now Juve manager Massimiliano Allegri.

This season, domestically, Milan have carried on where they left off last term, sitting level on points with leaders Napoli after 13 matches, having only lost once in the league to date.

"Stefano is - due to his professional competence and for his temperament and personality - our ideal head coach," technical director Paolo Maldini said.

"He has completely bought into the values and strategy of our club. His leadership has created a cohesive atmosphere for big ambition.

"The aim is to continue the journey we’ve begun and attain better and better results."