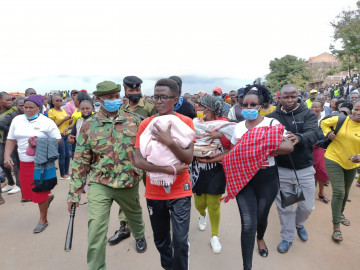 Deputy President William Ruto on Thursday gifted Ksh.100,000 to a new mother of triplets in Matuu, Machakos County after being moved by her story.

The DP made the donation when he toured parts of Machakos County to ramp up support ahead of the 2022 general election.

The woman, identified as Catherine Mutua, gave birth two months ago but after clearing her medical bills, was left in a bad financial position that she couldn’t recover from.

According to reports, she was even unable to afford to clear her rent arrears.

As Ruto addressed residents in Matuu, he overheard Ms. Mutua, who was part of the crowd, lamenting and crying about her struggles in life.

The DP was so touched that he decided to gift her Ksh.100,000 to lessen her predicament.

Police officers were forced to escort the woman to a lending agent where she opened an account and deposited the cash after some members of the crowd tried to forcefully take the money from her.