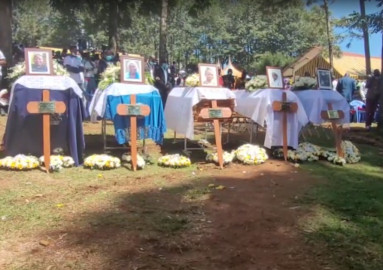 The funeral ceremony for the five family members who perished in a road accident in Voi on Christmas Day was on Friday held at the Kegogi Catholic Church ground in Sameta, Kisii County.

The five were then buried at their home in Nyakegogi village, Bobasi.

Friends and family mourned the late Bundi as a kind and generous man who contributed immensely to the construction of the local church.

Bundi, his wife Veronica and their five children were involved in a crash on the Mombasa-Nairobi highway on December 25, 2021 as they were travelling home for the Christmas festivities.

Three of the children were killed while the other two are presently in hospital receiving treatment.