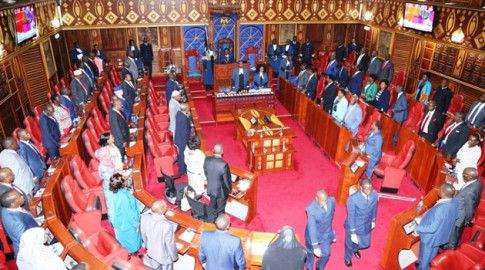 Azimio la Umoja leaning Senators have been blocked from travelling outside the country ahead of a critical debate on the controversial Political Parties (Amendment) Bill.

Kwale Senator Issa Juma Boy was stopped at the airport from travelling, an issue that raised a debate in the Senate Tuesday afternoon.

Kericho Senator Aaron Cheruiyot who also serves in the Parliamentary Service Commission raised the issue on the floor of the House wondering who issued the orders considering Parliament is an independent institution.

“If we are descending to levels where members are being stopped from going about their duties some of them either official or with family because of business that is before the House, then this country is descending to levels low than it has been since independence,” said Cheruiyot who also claimed the orders were coming from the Executive.

His sentiments were supported by Bungoma Senator Moses Wetangula who claimed the orders also affected staff members of the Senate who were travelling to South Africa for training.

“And if the intention was to have quorum for the debate, why extend it to the innocent staff of the House who are going for training?” quizzed Wetangula who demanded answers from the speaker.

However, Deputy Majority Leader Fatuma Dullo dismissed the claims saying every party can deal with their members the way they deem fit.

“What we are being told here is just hearsay, it’s important that the evidence be tabled so that you can investigate this matter, and I don’t think if there is any problem for any political parties to stop their members if they have an interest in a matter on the floor of the house, so whoever wants to go can go, whoever wants to stay can stay,” Dullo said.

One the controversial Political Parties Amendment Bill, the Senate Committee on Justice, Legal Affairs and Human Rights has recommended to the House that the bill be passed without amendments.

The recommendation has set the stage for an epic battle between President Uhuru Kenyatta and ODM leader Raila Odinga on one side, and Deputy President William Ruto on the other.

After the tabling of the report, Senators were given 24 hours to read the bill before the debate begins in earnest Wednesday afternoon.

Speaker Ken Lusaka ordered that any member interested in bringing amendments to the bill must do so by Wednesday at 2.30pm.