U.S says Cambodia not transparent about Chinese role in naval base construction 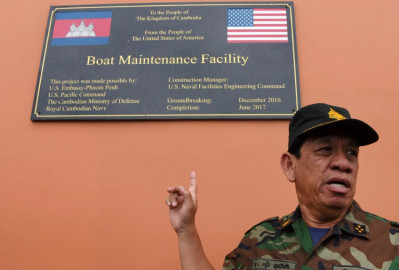 The Center for Strategic and International Studies (CSIS) has released a survey of new buildings and a road in Ream Naval Base in Cambodia showing that construction is continuing “amid concerns that the new facilities are being built to facilitate a Chinese military presence in Cambodia.”

The October 12 report from Washington-based CSIS showed that there were three new buildings and a new road built, among other changes, during August and September

U.S. embassy spokesperson Chad Roedemeier told VOA Khmer via an email on Thursday that the embassy is “aware of consistent, credible reporting that significant construction by the People’s Republic of China continues at Ream Naval Base.”

“The Government of Cambodia has not been fully transparent about the intent, nature, and scope of this project or the role of the PRC military, which raises concerns about intended use of the naval facility.”

The U.S. embassy spokesman went on to say that “The Cambodian people deserve to know more about the project at Ream and to have a say in this type of military agreement, which has long-term implications for their country,” adding that “any foreign military presence at Ream would run counter to Cambodia’s constitution and undermine regional security.”

Cambodian government spokesperson Phay Siphan told VOA Khmer that the CSIS study is wrong and baseless. He said the Ream base is neither for the Chinese military to use nor for any country to use as its military base.

"We confirm that the base is not built to serve the interest of China,” he said. “It's for the interest of Cambodia. And it's a world port that any country can visit officially. It's not for China to use exclusively."

Phay Siphan added that “no one has the rights to use the port as a foreign military base because the constitution does not allow foreign troops in Cambodia.

VOA Khmer contacted the Chinese embassies in Phnom Penh and Washington, D.C., for comment on the new construction at the Ream base. Neither responded.

Cambodian Defense Minister Tea Banh confirmed in June that China was helping to build infrastructure at the Ream Naval Base. His remarks came days after U.S. Deputy Secretary of State Wendy Sherman raised the issue at a meeting with Cambodian Prime Minister Hun Sen in Phnom Penh.

At the time, Tea Banh told the government-aligned news site Fresh News that Cambodia needed assistance to expand and modernize the base in Preah Sihanouk province to host large, deep-water vessels. He also said that while China was helping build infrastructure at the base, it came with “no strings attached.”

According to CSIS, “the buildings measure approximately 115 feet long and 20 feet wide. Available imagery indicates that land clearing began sometime after April 17, construction started in early May, and the structures were complete by May 21.” The photos were taken by Maxar and Planet Labs and published by the Asia Maritime Transparency Initiative, according to the report.

Last year, a Cambodian three-star vice-admiral, deputy commander and chief of the navy general staff, Vann Bunlieng, told the Nikkei Asia that Chinese-funded upgrades to Ream would begin soon. The Nikkei said in its October 3, 2020, report that it “seems likely that the new buildings are a part of those expansions, which will reportedly include a newly dredged port and a ship repair facility.”

The U.S. has alleged that China will maintain a military presence at Ream Naval Base. The Wall Street Journal in 2019 also reported that China has signed an agreement to have People's Liberation Army officers stationed at the naval base. And the U.S. government has received credible reports of construction activities by the Chinese military at Ream Naval Base.

The Cambodian government says aid and investment from China, which comes without reporting conditions, is needed for social and economic development.

It is notable that the Thursday email from the U.S. embassy spokesperson does not say the Chinese military is carrying out construction on the Ream base. If that were the case, it would be a significant development. Ream faces the Gulf of Thailand, which is adjacent to the South China Sea. Having access to Ream would extend Beijing’s regional naval reach.

But the growing bond between China and Cambodia “has heightened trepidation about China’s actual role in Cambodia,” according to Veasna Var, writing on EastAsiaForm.com in 2016.

China emerged as Cambodia’s largest military aid donor in 2018. Since then, Cambodia has become a proxy for U.S-China geopolitical rivalry, as Chheang Vannarith, president of the Asian Vision Institute (AVI), an independent think tank based in Phnom Penh, suggested to VOA Khmer in 2019.

Today, Beijing’s support of Cambodia helps Hun Sen move past international concerns about his nation’s poor human rights record and any resulting reduction in aid. In turn, Hun Sen said during a meeting with Chinese Foreign Minister Wang Yi September 12 that Cambodia would continue to “firmly support China’s legitimate position” on issues regarding its core interests such as Taiwan, Hong Kong and Xinjiang. All are areas where China is seeking to exert its authority and mold popular opinion.

At the meeting, Hun Sen said China was providing $272 million in grant aid, according to the Associated Press. When making the announcement, he listed areas where Beijing has assisted Cambodia such as the construction of more than 2,000 kilometers of roads and seven big bridges across the Mekong, Tonle Sap and Bassac rivers.