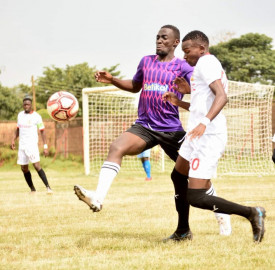 Shabana continued their ascendancy in the National Super League on Sunday at the Green Stadium Awendo after their 2-1 win against Dandora Love, their fourth on the bounce, moved them third on the log.

The hosts, Shabana, were quickest off the blocks after they took the lead in the 17th minute through Nehemiah Onchiri’s neat finish from close range.

Dandora Love restored parity in the 24th minute via a spot-kick converted by Kevin Ndungu after Chris Oduor was brought down in the box.

Shabana talisman Yusuf Mohammed was close to restoring their lead at the half-hour mark but his effort was cleared off the line.

Mohammed however slotted home the winner eight minutes from the break as the glamor boys held a flurry of Dandora attacks to prevail.

Shabana head coach Robert Ojienda, whose side has won four consecutive games since the last week of December lauded his charges for implementing their game plan, adding that there is to maintain their consistency as they eye a promotion berth at the end of the season.

“My players played well today given the toughness of our competitors. They are a good side as they gave us a good match.

“Our focus is to play one game at a time as it will help us attain more consistency.”

His opposite number James Nandwa rued costly mistakes that led to Shabana’s two goals, terming their latest setback as a wakeup call for his struggling side if they are to finish higher on the log at the end of the season.

“We made costly mistakes that led to both goals and I feel this is a reminder of the uphill task that we have to conquer if we are to avoid slipping into the relegation zone.

“I believe we’ll get better with time starting from our next assignment against Mwatate in Wundanyi.”