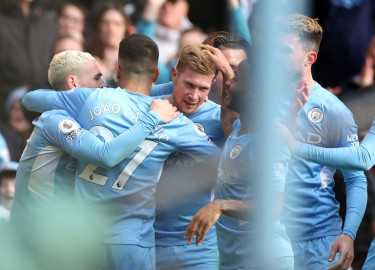 Manchester City took a major step towards retaining their Premier League title with a 1-0 win over second-placed Chelsea on Saturday, opening up a 13-point lead at the top of the table for Pep Guardiola's side.

Kevin De Bruyne's 70th-minute strike means that City have 56 points from 22 matches with Chelsea on 43 points. Third-placed Liverpool, who have two games in hand, including Sunday's match at home to Brentford, are on 42 points.

It was a fine solo goal from De Bruyne which settled the outcome, the Belgian riding a challenge from N'golo Kante before beating Kepa Arrizabalaga with a curling shot into the far corner.

Chelsea's best effort had come early in the second half when Mateo Kovacic fed Romelu Lukaku, but City keeper Ederson got out quick to make a fine save.

Phil Foden could have added a second for City six minutes from the end, but his shot from a promising position was high and wide.

Chelsea beat City in last season's Champions League final, but City have completed the double over the London side in the Premier League this season, having won 1-0 at Stamford Bridge in September.