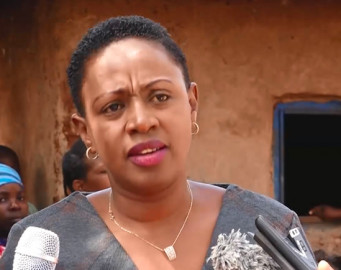 Murang’a Woman Representative Sabina Chege now wants the Jubilee Party to restructure failure to which members would be forced to defect.

Speaking on Thursday, the lawmaker relayed her frustration with the party’s leadership that has engendered uncertainty within the members.

She called upon the leaders to reorganize or rather relaunch the stalled operations to give the members a clear direction ahead of the fast-approaching general elections.

In a statement, the Azimio la Umoja allied politician expressed her frustration with the ruling party saying that members were running out of patience with the party’s stalling operations.

Sabina who declared her support for Raila Odinga’s led Azimio la Umoja Movement last year has been at the forefront of the coalition's rallies.

The Murang’a legislator urged the party to speed up its activities within a period of 30 days so as to give party members whom she said are running out of patience ample time to plan their campaigns.

Sabina similarly called on Kenyans to be voter-sensitive in the forthcoming elections saying that the political parties would be overshadowed by the preference of candidates.

“This time we will elect leaders based on their track record and not political parties,” she said.

“You will know the beginning from February and March when I unite with my people and declare my way forward,” she added.