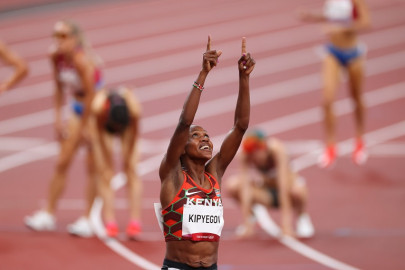 “Kenya has been very dominant at the Olympics for a very long time but for the Tokyo Games we had really worked hard with my coach in training and it was a great feeling to be the first man to end Kenya’s dominance in the race.” Soufiane El Bakkali of Morocco said following his win at Tokyo Olympics that ended Kenya’s long-standing dominance in the men’s 3000m steeplechase.

The water and barrier race also referred to as “Kenyan race’ has seen Kenyans dominate the event since 1968 Games held in Mexico City.

It is only during the 1976 and 1980 Games which Kenya boycotted that the title went to Sweden and Poland respectively.

Kenyans returned to winning ways at the 1984 Games and since then captured a gold medal nine times in a row including a podium sweep in 2004 Games.

With defending champion Conseslus Kipruto having failed to qualify for the Games, Kenya’s title hopes were bestowed on Benjamin Kigen, Abraham Kibiwott and Leonard Bett- with the trio making debut at the Games.

Kenyans held their breath as drama unfolded at the Olympic Stadium, El Bakkali would eventually break Kenyan hearts after crossing the finish line in a time of 8:08.90.

“I thank God for the bronze medal in my Olympic debut. I think my only mistake is that I misjudged my timing,” said Kigen in post-race interview.

National team head coach Julius Kirwa said the loss of the steeplechase title is a wake-up call for the athletics stakeholders in the country as they gear up for another busy campaign.

“Already we have held talks with coaches and we have reached an agreement that beginning early next year we will have our athletes competing in an event like the 3000m steeplechase train as a group with the help of the federation so that they can have specialised training,” said Kirwa.

Although it was a drop from the performance of 2016, Kenyans still had some scintillating performances that rocked the Japanese capital.

Eliud Kipchoge (marathon) and Faith Kipyegon (1500m) were the only athletes in Team Kenya who were defending their titles at the Tokyo Games.

Regarded as the best marathoner of all time, Kipchoge produced yet another outstanding performance to not only capture the men’s marathon title but also become the third man in history to defend the Olympic marathon title.

He clocked two hours eight minutes and 38 seconds which was faster than the time he posted in 2016 Games despite battling with challenging weather conditions in Sapporo.

On her part, Kipyegon renewed her unending rivalry with Sifan Hassan of the Netherlands whom she beat at the finals en route to clinching her second consecutive gold medal at the Summer Games.

It was a similar script in the men’s 800m where Emmanuel Korir stepped in to fill the void left by David Rudisha when he led a Kenyan 1-2 finish in the two-lap race ahead of Ferguson Rotich.

Athletics Kenya (AK) president Jackson Tuwei on his end of year remarks said Kenya well at the Tokyo Games with all medals coming from track and field athletes.

“It was quite a good outing for our team in Tokyo where we once again reigned supreme in Africa and third in the world in athletics events. Although we lost the 3000m steeplechase title that we normally look forward to, I think the team did well,” said Tuwei.