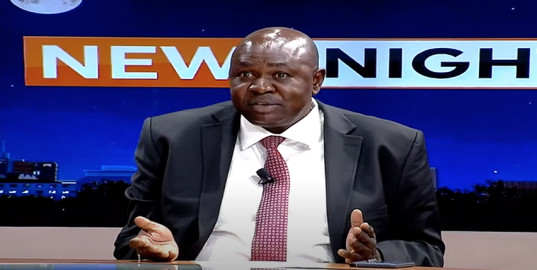 Owino, speaking on Citizen TV’s News Night show on Tuesday, affirmed that he is not afraid of being knocked out of the Orange Democratic Movement (ODM) party nominations for a ticket.

“To have taken the risk to become a policeman was a real risk, I’ve done a riskier job, a job where you leave your house not knowing if you will come back alive. and I am prepared to put my head on the rail,” stated Owino.

The aspiring Siaya County boss further noted that he is not interested in party politics but rather wooing the electorate for votes.

“The issue of nominations does not bother me, what bothers me is whether the people of Siaya are ready to elect me,” he said.

As to whether he would be willing to ditch the Raila Odinga-led party if things become unfavorable, Owino told Waihiga Mwaura: “Yes! Honorable Kiraitu Murungi has been elected six times in different parties.”

“We are in a multi-party democracy and therefore the issue of nominations is not a problem.”

The career policeman added that his desire to quit the service and plunge into politics was motivated by his need to transform Siaya people’s lives, claiming that as a police officer, he felt limited.

“Politics is everything about life because what politics basically means is you get power and you use it to create wealth and distribute it to people,” said Owino.

He previously stated that his main agenda for the county is economic transformation, poverty reduction through ​​intensive agriculture.

Owino says if elected, he will restock Lake Kanyaboli and ban fishing in the lake for six months.

“If we have a million fish in Lake Kanyaboli, which I consider the largest pond in the country, and stop fishing for 12  months, we can raise Sh4.8  billion in just one year if we sell the fish at sh400 each?" he was quoted saying.

Among the politicians Owino will be competing with for Siaya’s top seat are Senator James Orengo, former Rarieda MP Nicholas Gumbo and Deputy Governor James Okumbe.